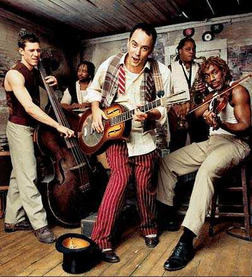 Hold on to your hats people, Dave Matthews Band is coming to Cricket Wireless Amphitheatre in September 2012.

They’ve had more people in their line up than I’ve had hot dinners but rumour has it Ross, Tim Reynolds and the new saxophonist Jeff Coffin will be making one of their first appearances together this year! It’s going to be a very special gig with a once in a life time line up!