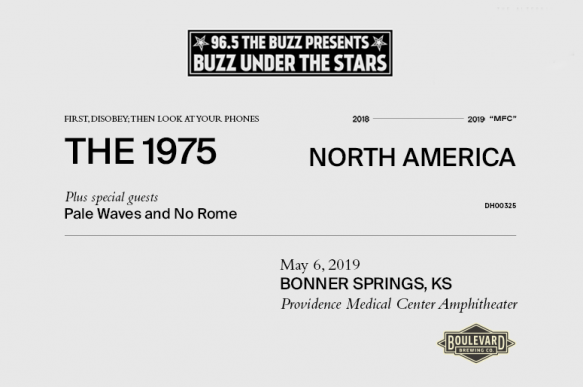 96.5 The Buzz presents Buzz Under The Stars at the Providence Medical Center Amphitheater, Bonner Springs, on Monday May 6!

Featuring The 1975 with special guests Pale Waves and No Rome.

The Manchester four-piece, The 1975, have been bemusing and thrilling fans and critics with their amorphous drifts between brooding art rock, crisp electronica, dancefloor R&B, and 80s gloss pop.

Pale Waves, also from Manchester were ranked fifth in the BBC Sound of 2018 poll and won the NME Under the Radar Award at the NME Awards.

96.5 The Buzz have been pushing Buzz Under The Stars hard and tickets are selling fast. If you want to see Buzz Under The Stars with The 1975, Pale Waves and No Rome at the Providence Medical Center Amphitheater, Bonner Springs buy your tickets now whilst they are still available.